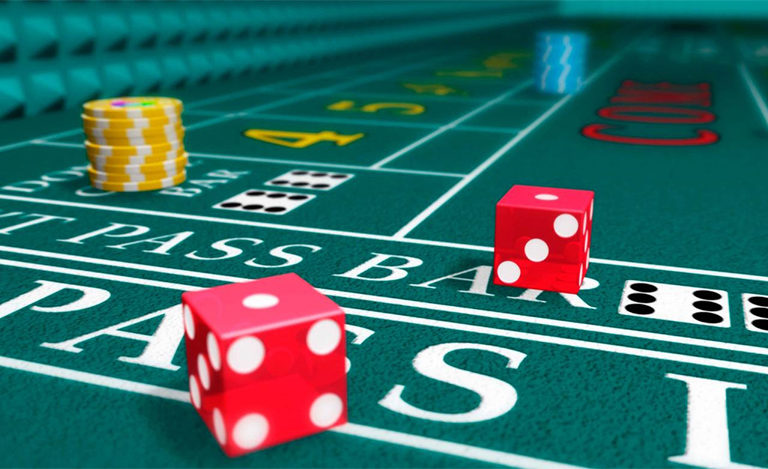 Craps is not an easy game to play, yet it’s not that hard. You need to be attentive to the rules in order to get the maximum out of the game and have a chance to make profits. In this section, we will give the main information on how to play craps and benefit from all the areas of the field. Playing craps requires logic, knowledge and patience. Learn how to play craps with our basic guide!

The game is built on rounds, which consist of rolls. The first roll is called the come out and can be crucial in the whole game, because 2,3,7,11 or 12 on the roll will end the round. Any other combination is called a point. A puck is placed on the table to remember what the current point is. The dice will be rolled until the same point or 7 is rolled. When it happens, the dice stops and winning bets are paid.

The betting process is quite simple: you need to click on the chip you are willing to bet on craps table. Make as many clicks as you want until you reach the desired amount of the bet. In some versions of online craps areas, where bets can be placed, will turn green and those, which are forbidden, will turn red.

Casino games always have various theories of origin that is why it is almost impossible to get a clear idea of how the game was invented. Craps is not an exception and has several theories of origin, all of which are quite interesting and useful. Probably the game was based on a mixture of the main theories, which makes it one of the most vivid examples among other online games.

Most of the historians think that this game emerged from Hazard, an Old English game and from Crabes, a French game. It was originally introduced in Louisiana by a famous gambler and politician in the end of 18th and beginning of 19th centuries. However, the game had several flaws, because it was easily manipulated. In 1907 John Winn introduced a modernized version and it had a ‘don’t pass bet’ area, which fixed the dice problem. It was the version that is almost identical to the game, as we currently know it.

When you play craps online it is important to understand the rules of payouts to get an idea of how the betting system works. In such a way, you will be able to predict the outcome and increase your profits. You should also understand the probability of occurrence of various combinations on the roll.

Some players also use an odds craps strategy. It is quite a rare bet and has no house advantage. When the point is thrown, you can bet up to multiply your Pass line bet ‘on odds’. It usually consists of two or three times on the first wager. When placing a bet, your best option is to see the point again, before the 7 appears. The best part of such bet is that it pays real odds and you can rely on a valuable reward.

There is also an alternative craps strategy, which is called the 5-count craps method. It is a right option for players, who don’t want to feel the adrenaline rush and like to experience a relaxed game. This strategy helps to minimize the losses, while the advantages remain high. The main idea of this method is to count to five points before making the bet:

Casino craps tables are popular all over the world due to the diversity of rules and strategies to use. That is why it is very important to learn about the tips and advices, which will help you enjoy the game and get the maximum out of it. Just make sure that you follow all the tips carefully and you will see how positive your gaming experience will be:

You should also pay attention to the most common phrases, which will help you master the rules of craps:

If you want to succeed in the game, you need to be aware of the possible bets:

Knowing all these craps tips, as well as special bets and phrases will definitely make you an experienced player and will give you a chance to enjoy a safe and profitable game.